Showing posts from September, 2016
Show All

- September 27, 2016
I have now written several articles on cultural appropriation. When people comment on articles on this topic, I have observed several recurring themes.

People also talk as if those who are trying to draw attention to the issue of cultural approppriation are behaving as though culture is a monolith or silo, where nothing can ever be transferred from one culture to another. Obviously, this is n…
Post a Comment
Read more

- September 25, 2016
This is my list of recommended reading for beginners. Many other lists are available. If you don't like my list, make your own. I have tried to keep the list fairly short, so as not to overwhelm you with a great long shopping list.

My recommendation would be to read widely and deeply, noting what you agree with, what riles you, and what attracts you. You don't have to agree with everything you read. Rather you should engage with it, see how it affects you, think about any issues it raises for you.

I have always had trouble with books that have exercises in them, because I tend to think, "Oh yes I will do that exercise later" and I either skip over it and never come back to it, or put the book down and never finish it.
Pagan booksThe Art of Conversation with the Genius Loci, by Barry Patterson I have often said to people that if they only ever read one book on Paganism, it should be this one. It is all about how to engage with the landscape you live in, and how to co…
Post a Comment
Read more 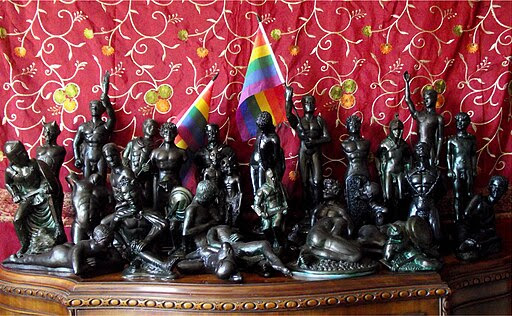 Here are a bunch of books for the LGBTQ Pagan reader. I have either read these and can recommend them, or I have read another book by the same author, and can therefore recommend the ones on this list.
Collection of some Contemporary Pagan & Male Nude Sculptures created by Malcolm Lidbury (Own work) [CC BY-SA 3.0], via Wikimedia Commons GayBlossom of Bone – Reclaiming the Connections Between Homoeroticism and the Sacred – Randy P. ConnerComing Out Spiritually: The Next Step – Christian de la HuertaThe Fire in Moonlight: Stories from the Radical Faeries – Mark ThompsonGay Body: A Journey Through Shadow To Self – Mark ThompsonGay Soul – Mark ThompsonGay Spirit: Myth and Meaning – Mark ThompsonThe Path Of The Green Man: Gay Men, Wicca and Living a Magical Life – Michael Thomas Ford InclusiveAll Acts of Love & Pleasure: Inclusive Wicca – Yvonne AburrowChaos Craft by Julian Vayne and Steve DeeEros and Touch from a Pagan Perspective: Divided for Love’s Sake – Christine Hoff Krae…
Post a Comment
Read more

"Good" people do bad things: statement on the Frosts

- September 14, 2016
There is absolutely no excuse, ever, for advocating the molestation of children.

Even in the 1970s, when some people were apparently rather confused about the boundaries of what consent was, the majority view was that sex between children and adults was always wrong.

Therefore, there is no excuse for the publication of chapter 4 of the book by Gavin and Yvonne Frost which claimed to be about Wicca, which advocated for the sexual molestation of minors. If they had repudiated the chapter and apologised for its inclusion and tried to do something to make reparation for its consequences, perhaps there might be a reason to rehabilitate them, cautiously.

But they never did apologise or repudiate it or seek to make reparation for it. (They did say that it didn't apply to people under 18, but what they advocated is abusive even if it involves people over 18, and it was 40 years before they even did that, despite numerous people in the Pagan community strongly rejecting what they wrote.) S…
Post a Comment
Read more
More posts