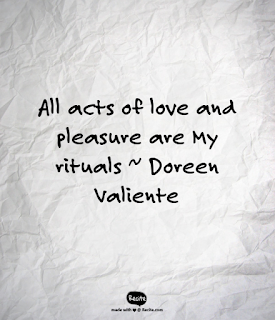 POLARITY, or action and reaction, we meet in every part of nature; in darkness and light, in heat and cold; in the ebb and flow of waters; in male and female; in the inspiration and expiration of plants and animals; in the systole and diastole of the heart; in the undulations of fluids and of sound; in the centrifugal and centripetal gravity; in electricity, galvanism, and chemical affinity. Superinduce magnetism at one end of a needle, the opposite magnetism takes place at the other end. If the south attracts, the north repels. To empty here, you must condense there. An inevitable dualism bisects nature, so that each thing is a half, and suggests another thing to make it whole; as, spirit, matter; man, woman; subjective, objective; in, out; upper, under; motion, rest; yea, nay.

‘Do you not know that at the dawn of manifestation the gods wove the web of creation between the poles of the pairs of opposites, active and passive, positive and negative, and that all things are these two things in different ways and upon different levels, even priests and priestesses . . . . .’

But ultimately, for me at least, polarity transcends sexuality completely. Sex can be a manifestation of it, but it is not inherently based on sex, or even on deity in an anthropomorphic sense. If I had to choose one image that most embodied, for me, the primal act of creation I see embodied in the wine blessing, it would be the following, from the "Evolutionary Remembering" in John Seed's Thinking Like A Mountain:


The third planet from the sun, our own earth, came into being about 4.5 million years ago. The ground then was rock and crystal, beneath which burned tremendous fires. Heavier matter like iron sank to the centre, while the lighter elements floated to the surface, forming a granite crust. Continuous volcanic activity brought up a rich supply of minerals, and lifted up chains of mountains. Finally, a bolt of lightning fertilized this molecular soup and an adventure into biology began. The first cell was born. You were there. I was there. For every cell in our bodies is descended in an unbroken chain from that event.

Then, about 4 billion years ago, when the temperature fell below the boiling point of water, it began to rain. Hot rain slowly dissolved the rocks upon which it fell and the seas became a thin salty soup containing the basic ingredients necessary for life.

Through this cell, our common ancestor, we are related to every plant and animal on the Earth. [6]

That, to me, is the true Great Rite, of which all other enactments, sexual or not, are merely symbolic. That moment of lightning striking the primeval sea to create the first living organism is what I see when the athamé touches the wine.

What does “inclusive” mean?

Inclusive doesn’t mean that we have to include everybody who asks to join; it means that we don’t exclude whole classes of people due to their innate or acquired characteristics (such as ethnicity, gender, sexual orientation, or physical characteristics).   Some people may not be suited to Wicca because they are drawn to a different path. Some people might not be suited to coven life because they don’t play well with others, or because they are not kind and considerate of others. Inclusive covens definitely have the right to exclude anyone with bigoted views such as racism, homophobia, transphobia, ableism, fatphobia etc. As Karl Popper pointed out, the paradox of tolerance is that it cannot tolerate intolerance.  Some people may not be a good fit for your coven because they have a very different approach to the divine / deities than you, or are interested in a different mythology.  I think I can safely say that I coined the phrase inclusive Wicca, and although I wasn’t the first per
Read more

When all the terrible things that are happening now seem overwhelming, it is useful to reflect on past struggles and try to find what worked. It is clear that broad coalitions are needed between different groups, as happened with the UK miners’ strike and LGBT people — the miners supported same-sex marriage when it came up as a policy in the Labour Party. Solidarity is real. I am collecting people's memories of resistance to racism and fascism in past decades, to inspire younger activists who are scared rigid by the election of Trump and the vote for Brexit. I will post the article(s) on Medium.com and Gods & Radicals . Here are some of my memories of resistance to oppression . I have also had a great contribution to the project from Sabina Magliocco, which will be published on Gods and Radicals on 16 November. I would be very grateful if you could share something with me for the article. Please feel free to share this link with other seasoned activists. It doesn’t have
Read more